The Shock of the New

Which Way for Experience Design in a Time of Chaos? 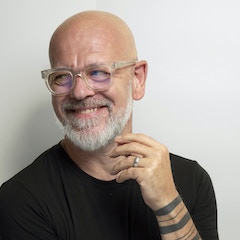 "Some people don’t like change. Turns out change doesn’t much care.”

This is a quote I’ve used in a lot of speeches. Mostly it was always a useful one, because it broke the ice. But it was historically also useful because it accurately described periods of - what felt at the time - like seismic change. Boy, if only we knew before 2020 what seismic could actually mean.

The past couple of years have been perhaps the ultimate example of “change not much caring.” Everything we thought we could quantify and rely upon was thrown on its head. And so, for those that don’t like their change to be of the seismic variety, it’s been the quintessential "shock of the new".

A few months back, I wrote about my basic philosophy for emerging from this time as a designer. I talked about how I’d like to do a healthy spring cleaning, an audit of what was good and not so good about the way things were, and a robust exploration of the way they could, might or maybe even should, be. Most of all I decided to be militant about this idea and that ultimately as I started putting pen to paper, I would commit to the idea that my eyes would be firmly forward. Towards the horizon. Looking only to the future as it were.

Which is all well and good, until you start to think, “Yeah, but what should the future look like?”

I’ve thought quite a bit about this, and about the questions raised by the above. After all, there’s a distinct chance that we have all been more than a little shell-shocked by this period of change. How could we not have been? And while we might be keen for something new, we’re also conceivably more cautious.

I think there’s something to this in the forms, typologies, and languages of design we’ve been drawn towards during these past few months of emergence. Is it any accident that one of the most interesting ideas put forth during that time was to reimagine movie theatres as drive-ins? Yes, there were practical reasons for this (hygiene, social distancing), but also the emergence of retro comfort as a concept. Even for those who never experienced the original, who were too young to have ever visited a drive-in, they still got the idea of it.

Think of the other forms. From geodesic igloos down every alley we can fit them, to an offer for my own private yurt. The latter promised all the virtues of glamping (boutique bathrooms in a nearby shipping container!) to room service delivered direct to my door. Although do Yurts have doors? Regardless, you get the picture.

And then the open-air markets, the town squares, the ever-expanding outdoor patios, the roof decks, or back decks, or just anywhere decks. It’s still an odd visual to look from the outside to empty insides of restaurants until you think those outsides are the OGs of human, communal experiences. The greatest hits. All of them born of necessity, but also in their universal touchy-feely qualities. It’s those original experiences that are now the conventions for our weekend retreats and, as this fall comes around, accompanied by all manner of blankets, heaters, fire pits, and rain tarps. This, for now at least, is the new normal we didn’t even fully realize we were looking for.

Take those settings and apply the same principles to the provenance of ingredients and culinary creations. Ideas like “farm to fork”. Yes, sustainable. Yes, a response to the mass manufacture of crap we’ve been living through for a lifetime. Yes, tailored, personal, individual, and championing the small business down the street in the best kind of feel-good response. But also, something that warms us in its harkening back. Back to a simpler time…back to a simpler life.

Look at me, telling you to look forward one minute and back the next. Bet you never thought cognitive and dissonance were my two middle names? But I think where things get interesting is in the idea of where “both” live. As I said in the previous piece: It’s all in the service of better.

In no way do I think this will be the be-all and end-all of our next phase of design thinking. But there really is something here, I think. How the design of places and experiences can combine the best of the new with a swaddling of the past.

And so, don’t get me wrong, I still want everything the new can bring to me. That drive-through better be the biggest, highest resolution screen with kick a** audio beamed straight to my car, along with locally crafted beer and a parade of killer street food trucks. But it doesn’t hurt that we’ll all be sitting under the stars like our grandparents did.

Because the comfort of that? Is fricking universal.